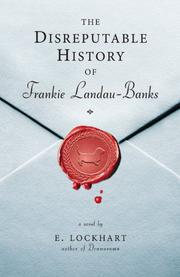 THE DISREPUTABLE HISTORY OF FRANKIE LANDAU-BANKS

This cerebral and offbeat comedy of manners will appeal to fans of John Green’s An Abundance of Katherines (2006). Spunky boarding-school sophomore Frances “Frankie” Landau-Banks is tired of being underestimated by the men in her life, including her upperclassman boyfriend Matthew and his wittier-than-thou friends. Inspired by P.G. Wodehouse’s Code of the Woosters, she infiltrates Matthew’s secret and exclusive male club—The Loyal Order of the Basset Hounds—and, unbeknownst to them, begins orchestrating their elaborate pranks. She hopes the boys will be awed by her ingenuity and finally acknowledge her brains as well as her recently developed body. But Matthew & Co. are less than pleased to discover Frankie’s deception, and she learns the hard way that “it’s better to be alone . . . than to be with someone who can’t see who you are.” Lockhart has transcended the chick-lit genre with this adroit, insightful examination of the eternal adolescent push-pull between meekly fitting in and being liked or speaking out and risking disdain. A funny feminist manifesto that will delight the anti–Gossip Girl gang. (Fiction. YA)