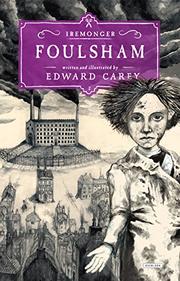 From the Iremonger series, volume 2

The middle volume of the Iremonger trilogy escalates in both suspense and strangeness.

In a fantastical Victorian London, the Iremongers have become wealthy, eccentric outcasts through managing the city’s rubbish, protecting themselves by the secret ability to change people into talismanic objects—and vice versa. After defying his family, Clod Iremonger is transformed into a gold coin, while his beloved Lucy Pennant becomes a clay button, cast into the vast heaps of garbage. As Clod is passed around by the downtrodden folk of Foulsham and Lucy befriends Binadit (the exiled “It of the Heaps”), the macabre past, despicable doings, and sinister plans of the Iremonger clan are slowly unveiled. Along the way, Carey’s splendidly deranged imagination and deliciously peculiar prose are on display, introducing a Dickensian cast simultaneously pathetic and grotesque. The lead couple gains depth as well; sweet, kind Clod, “the friend of things,” discovers unexpected talents and surprising fortitude, while cynical, light-fingered Lucy reveals a new, fierce tenderness and revolutionary zeal. Their parallel storylines dance without intersecting, finally reuniting only to be torn apart in a climax of apocalyptic industrial horror. Beyond the gripping adventure and creepy illustrations, the premise demands consideration of the tendency of raw capitalism to make people and things both interchangeable and disposable.

A story wondrous fine, full of terrors and marvels.