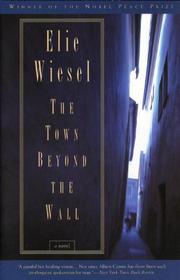 THE TOWN BEYOND THE WALL

The victim is saying his Prayers — Prayers directed towards a God he has never really found in all his obsessive fanatic searches for Him. Michael remembers the searches during his Prayers, remembers his pre-pogrom, Hassidic childhood in Hungary's "City of Luck," remembers his refugee's despair in a Paris of exile, remembers his one true friend, Pedro, and remembers, most and worst of all, the samples of human indifference that mock at life and make any God hard to find. In fact, ll of Michael's memories, all his desires to get back at time by going back in it have an ironic mockery all their own. For he is a prisoner now in his own birthplace, arrested during a three-day flight into the past; and the Prayers are the method of his torture. He must stand against the wall, as the Jews stand to pray, until he falls from bloated legs or confesses his "real" reasons for being in Hungary. No confession, Pedro would be the price. Instead, Michael stands, prays and remembers until he drops into his end, a prison cell. His own indifference is avenged by his care for a demented young prisoner; and if he is mad at the end, it is a madness that he values. The book is weighted with philosophical torments, spiritual abstractions, and the streak of dementia which gives it its power. The sufferings of the Jews (or of humanity) are introverted here into a picture something like the back-view of one of hagall's tortured prophets.