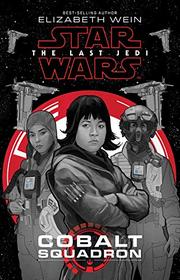 From the Star Wars series

Sisters Rose and Paige Tico lead a run in their starship, Hammer, for the Resistance under the orders of Gen. Leia Organa.

Rumor has it that the First Order may have a presence in the Attera Alpha and Attera Bravo systems, and it is the sisters’ job to do reconnaissance to find out. While out on a mission, they unexpectedly witness a team of TIE fighters in pursuit of a small starfighter in the Attera system. This starfighter docks itself inside Hammer before they can make the jump to hyperspace. Back on the Resistance base of D’Qar, the Hammer crew learns the two fugitives that were aboard the starfighter are leaders of an Atteran resistance movement, Bravo Rising. Organa decides to send Cobalt Squadron, led by Rose and Paige, to deliver supplies—but it does not go well. Wein offers a neat and succinct tale introducing the newest, Asian member of the Star Wars cast, Rose Tico, giving her an origin story that leads right up to the beginning of the opening sequence of The Last Jedi. For fans craving necessary backstory for the film, this may feel like better late than never. Though there are only a few scenes with Gen. Organa, Wein’s obvious love for the Star Wars story shines through when Leia enters a scene, providing spot-on dialogue that nails the character.

A nice treat for all Star Wars fans.