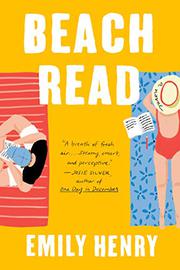 Two struggling authors spend the summer writing and falling in love in a quaint beach town.

January Andrews has just arrived in the small town of North Bear Shores with some serious baggage. Her father has been dead for a year, but she still hasn’t come to terms with what she found out at his funeral—he had been cheating on her mother for years. January plans to spend the summer cleaning out and selling the house her father and “That Woman” lived in together. But she’s also a down-on-her-luck author facing writer’s block, and she no longer believes in the happily-ever-after she’s made the benchmark of her work. Her steadily dwindling bank account, though, is a daily reminder that she must sell her next book, and fast. Serendipitously, she discovers that her new next-door neighbor is Augustus Everett, the darling of the literary fiction set and her former college rival/crush. Gus also happens to be struggling with his next book (and some serious trauma that unfolds throughout the novel). Though the two get off to a rocky start, they soon make a bet: Gus will try to write a romance novel, and January will attempt “bleak literary fiction.” They spend the summer teaching each other the art of their own genres—January takes Gus on a romantic outing to the local carnival; Gus takes January to the burned-down remains of a former cult—and they both process their own grief, loss, and trauma through this experiment. There are more than enough steamy scenes to sustain the slow-burn romance, and smart commentary on the placement and purpose of “women’s fiction” joins with crucial conversations about mental health to add multiple intriguing layers to the plot.

A heartfelt look at taking second chances, in life and in love.