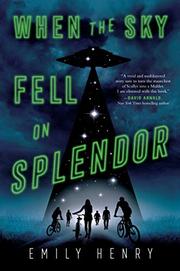 WHEN THE SKY FELL ON SPLENDOR

Five years after a steel mill explosion in Splendor, Ohio, six teens gain unusual abilities when they get too close to a UFO crash.

The Ordinary are Franny and her brother Arthur, Sofia, Remy, Levi, and Nick, brought together after they lost loved ones in the explosion and its aftermath. Franny and Arthur’s brother, Mark, is still in a coma, and their mother has left them. While filming “Ghost Hunters,” a new episode of their mockumentary web series, a disc-shaped object crashes, engulfing them in brightness. Soon, Franny’s having a weird effect on electronics and believes she may be inhabited by an alien, but she’s not the only one experiencing unusual things: Remy is having visions of the end of the world, and Nick develops incredible musical talent. Franny’s scary next-door neighbor, who was blamed for the industrial accident, is acting even weirder than usual, and the FBI is after them. Can they save each other and the world? The alien mystery is compelling, but this story’s heart beats with Franny and her friends. Franny’s recollections of her family before the tragedy are poignant, and Henry (A Million Junes, 2017, etc.) tackles profound loss and grief with sensitivity while emphasizing the preciousness of human connection in this vast and wondrous universe. Sofia’s family is from Mexico City, Remy is implied Japanese-American, and other main characters are assumed white.

Exciting, heartbreaking, and far from ordinary.