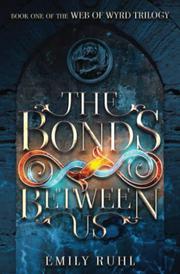 THE BONDS BETWEEN US

Book One of the Web of Wyrd Trilogy

A woman with elemental powers finds love while taking on the devil in this debut romantic fantasy.

Writer Katya Anders moved to Venice, Italy, three years ago. She lives with her best friend, Nina, and after a tragic upbringing in the United States, Kat finally feels as if she belongs. But while researching local myths for her next book, she gets the sense that Venice hides something. “People were afraid,” she notices, “and they obviously had been for a very long time.” One day, she bumps into a musician named Matteo with “expressive chocolate eyes.” She feels instantly bonded with him, and they agree to meet the next day at the San Nicolò festival. At home, she discovers a tattoolike mark on her wrist with red and blue strands intertwined. This is a “soulmark,” which should be impossible for her to possess. Kat is secretly a Daski, born to a human and a frost jotun from Norse myth. Her people have been denied soul mates by the fate-controlling Norns. Nina, a hopeless romantic and an Undine (water elemental), helps Kat prepare for the date nevertheless. Matteo woos Kat with a lovely night out and also possesses the soulmark. Then, near a stone bridge on the island of Torcello, a portal opens. The devil emerges, demanding the souls of seven children. Ruhl’s series opener focuses on Kat and Matteo’s romance while offering a detailed fantasy backdrop featuring the Vaettir, or Norse supernatural beings. Research helps the couple and their cohorts, including Matteo’s hotheaded brother, Leo, learn about a woman’s deal with the devil two centuries ago that still haunts Venice. Tension builds as readers wait for Kat’s special “kedja” necklace to break, which will unlock her dangerous ice powers. That Matteo is a fire-powered “Salamander” adds to the impossible odds of their happiness together. The cast expands to include arrow-shooting twins Arun and Janara and even Hela, “goddess of the Underworld,” who promises to cause the protagonist and her circle further trouble. Kat and Matteo’s romance is explored with the youthful enthusiasm inherent to new love. The audience will be interested to see if the author rocks their boat in the sequel.

A well-crafted fantasy marked by tenderness and optimism.