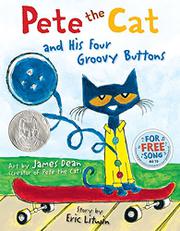 PETE THE CAT AND HIS FOUR GROOVY BUTTONS

In his third outing Pete the Cat follows the pattern of his previous appearances: Despite repeated wardrobe malfunctions, he maintains his upbeat attitude and bouncy charm.

This time around the focus is on the buttons on Pete’s favorite shirt, instead of his shoes, and there’s even a bit of math involved. Still, for readers who have met Pete previously there’s not much here that’s new. Pete moves from his cozy chair to a skateboard to the street outside to a surfboard on top of an old-style Volkswagen Beetle. In each spot, for no apparent reason, one button pops off. The repeated refrain asks “Did Pete cry?” and answers “Goodness, no! Buttons come and buttons go.” As a song it’s likely perky, but read aloud, the text can seem tedious and overlong. Still, the brightly colored, childlike paintings and playful typography should keep kids’ attention, and some will also enjoy identifying the large numerals as they count backwards from four to zero. A final twist finds Pete admiring his bellybutton, which will always be with him unlike the “stuff” that “will come and…go,” offering the option of a mildly anti-consumerist message for parents who choose to emphasize it.

Fans will definitely want to visit the publisher’s website to check out the extras, while newcomers will either do the same or let Pete go, depending on their taste.