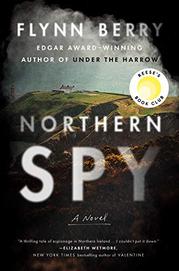 Berry delivers a taut and compassionate thriller as young mother Tessa is drawn into working as a double agent in the Irish Republican Army to protect her sister.

It's been years since the Good Friday Agreement was signed, but tensions in Northern Ireland remain at a constant simmer. Tessa moves through the simple motions of her life: taking care of her infant son, working at the BBC News Belfast bureau, spending time with her mother and sister. The physical isolation and beauty of her home village hint at the possibility of a world in which one doesn’t always have to be alert for terrorists; Tessa is old enough, however, to remember the Troubles, and she fears that the IRA will never truly surrender. Still, it comes as a shock at work one day when she sees a video of her sister participating in an IRA robbery. But even more shocking is the revelation that comes from Marian herself once she is able to reach out to Tessa: She's been a member of the IRA for seven years, drawn in by their talk about economic inequality, and has recently begun feeding information to MI5 in order to create space for peace talks. After a bomb she created for the IRA failed to blow up, though, she's under constant surveillance and can no longer meet with her British handler. And so Tessa joins her sister as a double agent: She's accepted by Marian’s crew and asked to do increasingly dangerous tasks for the IRA, which she then reports to her handler. Days of espionage are balanced by quiet moments with her son as Tessa comes to realize that putting herself in danger is justified, even necessary, if she wants him to grow up in a safer Ireland. Berry's use of short chapters, often divided into several smaller episodes, is particularly effective in reflecting Tessa's fragmented sense of loyalty and safety. This is not a book of action, though there is plenty, but instead a greater reflection on personal choice and consequence.

A poignant and lyrical novel that asks what is worth sacrificing for peace—and provides some answers.