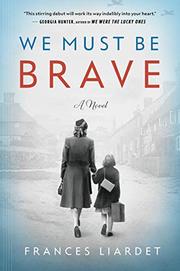 WE MUST BE BRAVE

This chronicle of an Englishwoman’s life across the middle of the 20th century radiates love and suffering through a caring but incomplete marriage, war, and aching affection for other people’s children.

In scenes lit by small yet plangent detail, Liardet’s U.S. debut offers a slow reveal of a story, piecing together Ellen Calvert’s life in the English village of Upton. Born into a wealthy family, Ellen was 11 in 1932 “when things started disappearing,” the first indication of the financial ruin that would lead to her father’s suicide and the family’s shameful, swift descent into poverty and hunger, leavened only by the unspoken kindness of a small local community. Ellen emerges from this emotional crucible a determined, clearheaded, reserved young woman who recognizes, at 18, that love could be hers in the form of 39-year-old mill owner Selwyn Parr. But Parr was damaged in World War I, and although his feelings for Ellen are tender and complete, they will never include a sexual relationship. Liardet does a fine job of seeding the past into the present, dropping hints of Ellen’s terrible early suffering while introducing married, practical Ellen in 1940 as she opens her home to Pamela, the 5-year-old survivor of a bombing raid in nearby Southampton. Unexpectedly, and without, at first, Selwyn’s blessing, Ellen finds herself falling into the devoted role of Pamela’s mother. Quicksilver Pamela, however, is only hers temporarily. The novel’s long arc reaches far beyond the end of the war; by the 1970s, Ellen is a widow, suddenly awoken again, through the needs of another desperate child, to the bright spirit of Pamela. Lovely, unshowy prose—“Outside the air was like milk. We had these fogs from time to time”—gives lyrical life to the countryside, the seasons, and to Ellen’s sensitivities during a long span of endurance and profound emotion.

Intense passion is concealed behind a facade of British modesty in this understated yet blazing story of hearts wounded and restored.