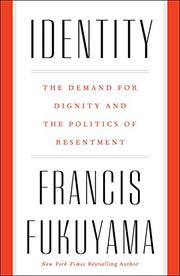 The Demand for Dignity and the Politics of Resentment

The renowned political scientist argues persuasively, and urgently, that a desire for recognition of one’s dignity is inherent in every human being—and is necessary for a thriving democracy.

Drawing on Luther, Rousseau, Kant, and Hegel, among others, Fukuyama (International Studies/Stanford Univ.; Political Order and Political Decay: From the Industrial Revolution to the Globalization of Democracy, 2014, etc.) offers a historical overview leading to the modern concept of identity as comprised of thymos (“a universal aspect of human personality that craves recognition”), a belief in the distinction between the inner and outer self, and an evolving concept of universal dignity. “The broadening and universalization of dignity turns the private quest for self into a political project,” he writes. The author ascribes the contemporary rise of identity politics to a yearning “for equal recognition by groups that have been marginalized by their societies.” These groups, mobilized by political leaders around the idea that their dignity has been disparaged or disregarded, fuel a “politics of resentment.” Fukuyama sees nothing wrong with identity politics, unless “ever narrower group identities” threaten “the possibility of communication and collective action.” When identity groups—seeking recognition on the basis of race, ethnicity, gender, or religion—see one another as threats, they will resist identifying themselves with “more integrative national identities” that are essential for democratic societies. Economic modernization and rapid social change shatter a sense of community and lead to “confusing pluralism” that often causes individuals to align themselves with religious or nationalistic groups. “Both nationalism and Islamism,” writes the author, “can thus be seen as a species of identity politics.” He faults the left for failing to build solidarity around large collectivities (the working class, for example), instead focusing on “every smaller” marginalized group. To counter this fragmentation, Fukuyama advises that “successful assimilation of foreigners” might curb vociferous populism, required national service could encourage “virtue and public spiritedness,” and basic civics must become a strong part of public education to foster informed, open-minded citizens.

A cogent analysis of dire threats to democracy.