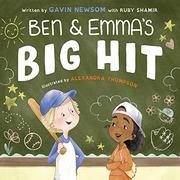 by Gavin Newsom with Ruby Shamir ; illustrated by Alexandra Thompson

A young child with reading difficulties discovers that he’s not alone…in more ways than one.

Newsom, current governor of California, calls on his own childhood experiences with dyslexia in describing how Ben, a White child, is good at baseball but struggles to link letters with sounds to make words. None of the other three children at Ben’s table seem to be having such trouble. Emma, a Black girl who’s also on Ben’s baseball team, is even poring over big chapter books already. At last Ben’s embarrassment culminates in a meltdown, which sparks a tearful admission from Emma that she’s just pretending to read and a rueful one from their reading teacher, an Asian woman named Ms. Kim, that, well, shehas never been able to hit a baseball. The children offer to coach her and then, having watched her swing again and again until she at last swats a dunker, come to understand that never giving up is the key to success. Thompson’s spacious and simple cartoon illustrations depict Ben’s other two tablemates with beige skin, and one of them wears a hijab. A lengthy personal note from the lead author offers further encouragement (for all that it’s addressed to readers more proficient than the likely audience), and a short list of print and web resources provides leads to more findings and strategies. (This book was reviewed digitally.)

Swings well enough to get struggling readers to first base—and perhaps beyond.