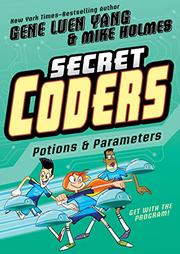 From the Secret Coders series, volume 5

After Robots & Repeats (2017) the heroes code their way into and out of the villainous Dr. One-Zero’s clutches.

After Josh takes point in coding an escape from the vicious ducks with teeth, the coders find Hopper’s father—but unfortunately, he and the other captives have been fed the mind-wiping Green Pop. Even worse, Dr. One-Zero steals Light-Light. They’re trapped with bottles of the Green Pop when Josh finds a hint for the lock’s passcode (interrupting Eni’s earnestly awkward romantic confession to Hopper). The resulting binary-to-ASCII puzzle makes good use of graphics for a quick, crystal clear recap on binary. Liberated, the three kids face pressures—Hopper’s mother wants them to leave town; Eni’s threatened with transfer if his sisters catch him with his friend; Josh feels like a third wheel in the friendship—but only they, and Professor Bee, can stop One-Zero’s latest diabolical scheme. Bee also reveals the truth behind his noselessness in a wild surprise crossover with Edwin Abbott’s Flatland: A Romance of Many Dimensions (1884). The cliffhanger sees the multiracial trio on the verge of coding a portal into Flatland, and it’s followed by a comedic short that uses coded repeats to find Josh’s dog.

While the coding instruction’s as top-notch as ever, in this installment it’s interpersonal dynamics and characters that, satisfyingly, take center stage.