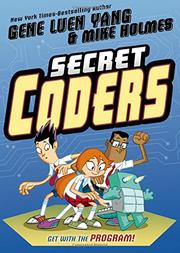 From the Secret Coders series, volume 1

Hopper’s first day at Stately Academy goes terribly until her “7”-shaped earrings trigger a code in a robot bird, commanding it to display three eyes.

Classmate Eni, whose father is a software engineer, kindly explains the controlling binary code to Hopper. The user-friendly explanation takes advantage of the graphic-novel format, providing a visual alongside the narrative description. The plot makes manipulating binary a game, inviting readers to decode number sequences alongside the characters. When they decode a combination lock on a shed, Hopper and Eni enter it (against the wishes of the villainous, crotchety, old janitor) and uncover its secret content—an adorable robot programmed to clean the sidewalks. This programming too is thoroughly explained visually, then put to an unorthodox application against some kids who bully Hopper. Other villains include an over-the-top creepy visitor to the school making a mysterious demand of the principal and the student-hating principal himself. The school’s coded secrets that the protagonists unravel lead to a showdown that goes straight for cliffhanger without a hint of resolution—right when the story feels like it’s just getting going. Worse, the abbreviated story leaves little room for characterization other than introducing Hopper’s family background as conflict to be addressed in a later installment. Hopper is Asian-American, and Eni appears to be African-American.

Despite the frustrating lack of conclusion, the friendly art and nifty concept will leave readers eager for the next book, which should be able to get off to a rocketing start.