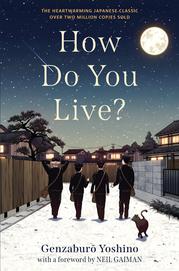 HOW DO YOU LIVE?

A teen ponders the complexities of life, history, and humanity in this 1937 classic from Japan that is being animated by Hayao Miyazaki.

Honda “Copper” Jun’ichi is an introspective 15-year-old living in Tokyo with his mother; his father died two years earlier. Like a typical teenager, Copper goes to school, spends time with his friends, and has experiences that affect his worldview and personal growth. Copper’s analyses of his friendships and the bullying of a classmate from a poorer family, along with his youthful maternal uncle’s thought-provoking conversations on science, ethics, and world history, add dimension to a spare plot. It is this latter relationship that produces Copper’s nickname, shortened from Copernicus and reflecting his uncle’s observation that, despite his age, Copper was already developing an expansive, Copernican approach to the world. The colloquial tone of the uncle’s notebook entries and the omniscient narrator’s occasional comments directed at readers are engaging. Simple and beautiful seasonal details reflect Copper’s emotional journey. Small glimpses into prewar Japanese life and culture, including tofu making, school social hierarchies, city life, and the intricacies and symbolism of words, contribute to the atmosphere. A foreword by Neil Gaiman perfectly captures the mood and significance of this book, a childhood favorite of Miyazaki’s and one that is sure to find a select, but eager, readership outside its original homeland.

A quiet, introspective look at life and how to be human.