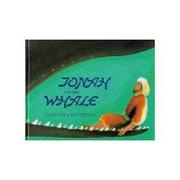 JONAH AND THE WHALE

An accessible but undistinguished simplification of the Bible story, with the gratuitous addition that Jonah is a man ostracized by his neighbors because he's so lazy. Patterson's bold, painterly illustrations are more satisfactory: using heroic figures and broad areas of color that recall early Renaissance frescoes, he sets the story firmly in the early eastern Mediterranean and provides an agreeably dramatic whale, including one glimpse from inside-out as Jonah emerges. An acceptable additional edition. (Picture book. 4-8)