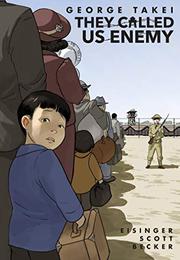 THEY CALLED US ENEMY

A beautifully heart-wrenching graphic-novel adaptation of actor and activist Takei’s (Lions and Tigers and Bears, 2013, etc.) childhood experience of incarceration in a World War II camp for Japanese Americans.

Takei had not yet started school when he, his parents, and his younger siblings were forced to leave their home and report to the Santa Anita Racetrack for “processing and removal” due to President Franklin D. Roosevelt’s Executive Order 9066. The creators smoothly and cleverly embed the historical context within which Takei’s family’s story takes place, allowing readers to simultaneously experience the daily humiliations that they suffered in the camps while providing readers with a broader understanding of the federal legislation, lawsuits, and actions which led to and maintained this injustice. The heroes who fought against this and provided support to and within the Japanese American community, such as Fred Korematsu, the 442nd Regiment, Herbert Nicholson, and the ACLU’s Wayne Collins, are also highlighted, but the focus always remains on the many sacrifices that Takei’s parents made to ensure the safety and survival of their family while shielding their children from knowing the depths of the hatred they faced and danger they were in. The creators also highlight the dangerous parallels between the hate speech, stereotyping, and legislation used against Japanese Americans and the trajectory of current events. Delicate grayscale illustrations effectively convey the intense emotions and the stark living conditions.

A powerful reminder of a history that is all too timely today.