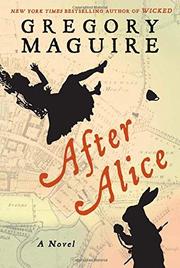 Continuing his tradition of rewriting fairy tales with an arch eye and offbeat point of view, Maguire turns his attention to Lewis Carroll and Alice’s Adventures in Wonderland. Alice has dropped down the rabbit hole—“again,” sighs an exasperated governess, one of the story’s many bêtes noires—and now her best friend and confidante, Ada Boyce, is falling in after her, looking to bring our young Persephone, or perhaps Eurydice, back into the light. Well, of course, Ada finds all sorts of curiouser and curiouser things down below, from hookah-smoking caterpillars to mad hatters and pince-nez–sporting sheep, with Carroll’s original cast of characters plus a few of Maguire’s own imagining. Up on Earth, Maguire populates the scene with all kinds of folks from real life, among them Walter Pater, Charles Darwin, and various members of the British royal family, who fuss about doing serious and real-world things—including, in a nice, smart closing turn, a meditation on the evolutionary qualities of, yes, the imagination. Not that Alice and Ada aren’t (weren’t, that is) real, but Maguire leaves it to them, mostly, to enjoy the wackiness of the underworld and for the grown-ups to do the pondering. Still, some of the slyest moments come when the two worlds collide: “I have always heard that Queen Victoria was moderate in her tastes,” says Ada, confused at a subterranean knight’s alarm that the queen is likely to have their heads. And there’s no end to sinister possibilities along with the usual charming Alice storyline—after all, Lewis Carroll didn’t inscribe the entrance to Wonderland’s tiny door with the words out of Dante, “All ye who enter here, abandon hope.”

A brilliant and nicely off-kilter reading of the children’s classic, retrofitted for grown-ups—and a lot of fun.