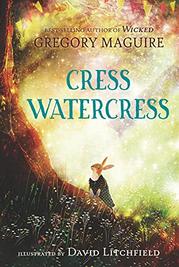 A young bunny copes with the death of her father and the move to a new home.

Mama moves her children, Cress and baby brother Kip, one spring evening as the moon is in the sky. Their new home is in a dead, hollow oak tree called the Broken Arms; its ramshackle state reminds Cress of the Watercress family’s loss. Natural dangers, including, most saliently, a snake nicknamed the Final Drainpipe and Monsieur Reynard the fox, feel more immediate here. As they settle in, there’s a perfect seasoning of domesticity, adventure, and contained peril, as on the day Cress and Finian, from a neighboring squirrel family, are swept over a waterfall on a raft. Cress confronts—and charms—Tunk the Honeybear with aplomb, but then she and Finny are briefly held captive by an arrogant, pretentious skunk. Maguire’s narrative offers wry puns, rich vocabulary, and entertaining dialogue, and Litchfield’s glowing, slightly stylized, full-color illustrations present an enchanting, magical peek into this woodland world. Cress’ personality is nicely realized as a child on the cusp of growing up as she deals with sorrow, crankily takes responsibility for Kip, and argues with her mother (who, like Little Women’s Marmee, puts her own anger in check to step up for her children). The anthropomorphized world feels true to itself and to the animal natures inhabiting it.