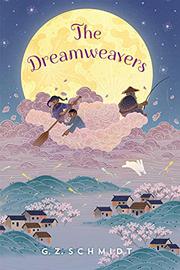 Fraternal twins embark on a magical adventure to rescue their grandfather and break a decadeslong curse.

After their parents’ mysterious disappearance in the City of Ashes, 12-year-olds Mei and Yun have been outcasts in their village. Their orphan status and reputation for seeing vaporous auras have left them with few friends. The sister and brother have been raised by their grandfather, who is known for his delicious cooking. Word of his talent has reached the Imperial City, and the Emperor’s son will be visiting to taste their grandfather’s famous mooncakes. But a sour mood has overtaken the village, and the mooncakes taste disgusting and rotten. The twins’ grandfather is taken away to the palace to await trial for supposedly using harmful magic on the prince. Determined to rescue him, Mei and Yun undertake a dangerous journey that reveals hidden truths about their family’s roots and the cursed City of Ashes. Set in ancient China during the Ming dynasty, this fantasy incorporates elements of Chinese folklore, with the Jade Rabbit acting as a spiritual guide for the twins, references to the Monkey King, and the presence of a mirrorlike dream world. The twins’ sibling bond never wavers throughout the challenges they face; like yin and yang, their individual personalities and strengths balance each other and highlight the story’s theme of achieving peace by acknowledging both the light and the dark and creating your own destiny.