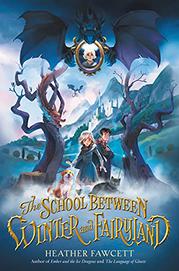 THE SCHOOL BETWEEN WINTER AND FAIRYLAND

The care of magical creatures has never been so important.

You know that story about a boy hero who goes off to a school for magic? The one with the slightly aloof headmaster, the magical beasts, and the prophecy that says he’ll go up against a disembodied evil that might destroy him? This isn’t that story. Sure, all those elements are here: There’s a wunderkind, Cai Morrigan, and the Inglenook School of Magic, and there’s definitely a prophecy. But this story is about his self-proclaimed sidekick, Autumn Malog, a white-haired 12-year-old beastkeeper at the school who is desperately seeking clues into the mysterious disappearance of her twin brother, Winter. Autumn and Cai make a pact to help each other—she believes Winter is trapped inside the school, and Cai knows the castle better than anyone, and he is secretly afraid of dragons while Autumn has a gift with the beasts (she counts a boggart as her friend). That’s when the true magic begins. Fans of other boy wizards will be mesmerized by this original addition to the genre, and humor-loving readers will revel in the Diana Wynne Jones–style snark that’s interjected throughout. Themes of class, education, and equality are interwoven seamlessly, providing additional food for thought. Once readers are buried in the pages, they’ll beg to know when the sequels are coming out. Autumn Reads as White; Cai has light-brown skin.

A magical addition to any bookshelf.