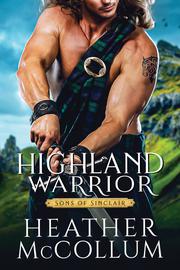 From the Sons of Sinclair series, volume 2

A warrior gives up everything for love in McCollum’s latest historical romance.

This second installment of the Sons of Sinclair series picks up with the story of Joshua Sinclair, the brutal Horseman of War who was last seen heading for foreign lands to polish up his mercenary skills. After a bloody battle at South Ronaldsay, Joshua travels to Orkney Isle to train Lord Robert Stuart’s soldiers in defensive maneuvers, though Joshua is far less interested in making war than he used to be. He’s ready to head back to his home when he’s waylaid by fierce fighter Kára. She’s desperate to help her people defend themselves from Lord Robert and his men, who, Joshua learns, hunted, raped, killed, and imprisoned many of them in the past. Joshua quickly falls for Kára, but he’s hesitant to join in her fight, as he’s seen the terrible cost of combat and knows that the Orkney inhabitants don’t stand a chance against the men he helped to train. But Kára’s persistence and her people’s desperate plight convince him to help; he lobbies for a way to avoid an all-out war, but a murder and a kidnapping alter his plans. McCollum’s lengthy novel wastes no time jumping into a romance. Joshua and Kára kick their relationship off with a steamy sex scene early on, and the story’s pace never slows down. Joshua is a very attractive Scottish warrior, complete with bulging muscles and a soft side (he’s great with kids), but he’s also rather complicated. It’s a nice twist to see the Horseman of War seek out alternatives to violence, and it’s always lovely to see a swordswoman who’s fully capable of extracting herself from danger. A clever trick and other unexpected events precede the ending, which ties things up nicely.

Love is a battlefield in this engaging wartime tale.