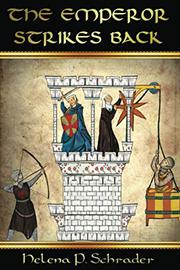 THE EMPEROR STRIKES BACK

A European emperor goes to war with his own Crusader subjects in this historical novel.

Frederick II Hohenstaufen, the Holy Roman emperor, is the nominal overlord of Outremer—the Crusader states that European Christians established in the Holy Land. But Frederick’s temporary treaty with the sultan of the Saracens has made him unpopular with Outremer’s Christians, who feel beset by enemies on all sides. What’s more, the emperor’s claim to the throne of Jerusalem is being disputed by the local lords there. In all these matters, Frederick blames John d’Ibelin, the honorable lord of Beirut, who recently seized Cyprus from the emperor’s chosen governors and who has won the favor of the land’s teenage king, Henry. Frederick strips John of his title and of Beirut itself, ordering that the Ibelins “vacate the city within 30 days of the judgment of this court or face the consequences of their treason.” As the emperor moves to subdue his own subjects, the embattled Ibelins—including John’s impulsive but capable heir, Balian, and his teenage daughter, Bella, who aspires to become a nun—are left to protect all they have built while withstanding the wrath of an entire empire. Schrader’s (Rebels Against Tyranny, 2018, etc.) prose manages to summon the culture and time period of the Crusader states while remaining light and readable: “As far as the Archbishop knew, this man had not committed any great sins—at least not recently. There were rumors, of course. Whispers of nuns ravaged and churches plundered, but from long ago, and the victims had been Greek, in any case.” The houses and backstories are as dense as anything from Frank Herbert or George R.R. Martin, and this slows the pace down a bit even as Schrader attempts to hew to the tales of a few main characters. The amount of detail and underlying research in the novel is remarkable, and fans of history will not mind the digressions and connections that ornament the plot. The author manages to spin quite an epic out of this relatively obscure historical event, bringing a vibrant forgotten world to life in the process.

An impressively imagined empire tale set in the medieval Levant.