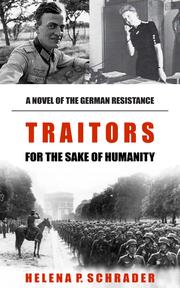 TRAITORS FOR THE SAKE OF HUMANITY

A Novel of the German Resistance to Hitler

In Schrader’s historical epic, a group of Germans acts against the Nazi regime.

Germany, 1938. Chancellor Adolf Hitler and his National Socialist Party have changed the face of Germany. While many Germans seem to almost worship the new leader, the young Baron Philip von Feldberg is not so sure about the direction the country has taken. “Philip noted the huge Nazi flag flapping before the station and caught sight of the straw swastikas hung on the Christmas tree at the post office. In one of the store windows, someone had placed a photo of Adolf Hitler and adorned it with greens and a candle as if it were the picture of the Virgin or a saint.” Regardless of his feelings for the Führer, Philip is a member of the German General Staff, the group of men who will be in charge of executing the war that Hitler seems to be itching to start. It turns out he isn’t the only Hitler-skeptical member of the General Staff. He soon strikes up a friendship—and more—with an outspoken secretary named Alexandra Mollwitz. There are others who are horrified by the Nazi’s excesses: Marianne Moldenhauer, a fed-up factory worker; Peter Kessler, a disillusioned Gestapo officer; even Alexandra’s boss, Gen. Friedrich Olbricht. But are these Germans willing to betray their government in order to save Germany—and maybe the world—from destruction? Schrader’s prose is spare but fluid, as here when illustrating a camp Marianne attends during her national labor service: “The Duty Leader woke the girls in the barrack with the usual loud ringing of the bell, followed by shouts of ‘Wake up! Wake up!’ A chorus of groans and muttered curses could be heard as the girls rolled out of their bunks, and the everyday chaos of a hundred girls rushing to the showers began.” The author is less adept at handling some of the romantic relationships—they are quickly established and largely uncomplicated—but romance is perhaps not the point of the book. The novel is a deeply researched window into the wartime lives of Germans at odds with Hitler’s regime, and while the story of Operation Valkyrie may be well known, Schrader offers the larger context for the German resistance with admirable depth and detail.

A rich historical novel of Germans who plotted against Hitler.