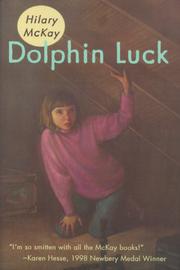 Four eccentric but gallant children get into an amazing amount of trouble in this madcap comedy from McKay (The Amber Cat, 1997, etc.). The Robinson family’s mother is sick and their father takes her away to recuperate, sending the twelve-year-old twins, Perry and Ant, to visit with their kooky Aunt Mabel, while ten-year-old Sun Dance and eight-year-old Beany stay with a neighbor. The twins are supposed to travel alone by train to Mabel’s, but they get off at the wrong stop and are several hours late. They know Mabel neither by her appearance, nor her last name, so wind up moving in with a bizarre old lady who is too batty to tell them that she’s not their aunt. Meanwhile, Sun Dance devises a burglar trap, accidentally ensnaring Mabel, who is searching for the missing twins. Not to be outdone, Beany spends her time wishing on what she believes to be a magical sword, then digs up the garden to see if her wish—that her recently buried beloved dog went to heaven—came true. For readers unfamiliar with the previous books about this lot, the set-up may feel sluggish; that the whole affair is wildly improbable won’t surprise McKay’s fans. Ultimately, the book gains momentum, becomes enjoyably outrageous, and culminates in an amusing, gratifying ending. (Fiction. 9-12)