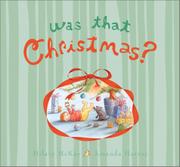 A three-year-old girl named Bella is confused about the actual timing of Christmas in this British import from McKay (Saffy’s Angel, p. 661, etc.). The story begins by introducing Bella and her cat, Black Jack, who have grown together from their first Christmas when they were babies and didn’t understand Christmas at all. Now Bella attends a preschool, where she plays the part of a shepherd in the Nativity play and Black Jack plays the part of her lamb. After Santa visits the preschool, Bella mistakenly thinks that Christmas is over and that she and Black Jack have missed receiving their presents. Her mother, father, and grandmother each patiently list all the holiday tasks and pleasures that must be experienced before Christmas will be all over. Many of their traditions are British ones that are different from those in the US (Christmas crackers, mince pies, sausage rolls, tea for Santa), and some of Bella’s expressions (“Is it Christmas at last?”) are distinctly British, though their location is never specified. Still, it’s nice to find true Britishisms in a text for American readers. Soft, expressive watercolor illustrations are pleasant additions, though their pastel palette and old-fashioned feeling, along with Bella’s young age, make the story seem more intended for toddlers than the longer text would indicate. (Picture book. 2-4)