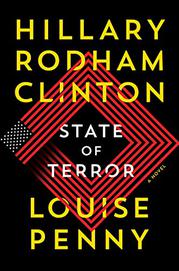 There are two types of people likely to pick up this book: those who enjoy thrillers and those looking for fresh insight into one of the most powerful political figures of the last 30 years. Neither is likely to be entirely pleased by this slow-moving tale. The setup is solid enough: Ellen Adams has just joined the new president’s administration when three Pakistani nuclear physicists are targeted by deadly explosions in London, Paris, and Frankfurt—an event that raises alarms about terrorists gaining possession of nuclear weapons. The first issue with this novel is that a secretary of state engages in a lot more talking than doing. The action, such as it is, occurs in scenes dominated by Adams’ adult children, and this presents readers with another problem. Her son, Gil, gets off the bus one of the physicists is riding seconds before it blows up. He escapes because his mom gets a tip from a staffer and gives him a call, but the ultimate source of the tip is anonymous and Gil’s reasons for being on that bus are unclear—and these unknowns are complicated by the fact that he’s a convert to Islam and Islamic extremists are implicated in the attacks. Katherine, the secretary's media-executive daughter, not only travels with her mother as she jets around the world, but also helps out with a little light espionage. The authors are asking readers to believe that Adams’ colleagues, her peers, and her boss—the president of the United States—are comfortable with her directing the American response to terrorist attacks in which her son was involved, nor do they stop her from treating a high-stakes global manhunt as Take Our Daughters to Work Day. This is all to say that sticking with the narrative means accepting that this is fantasy, not a revealing glimpse behind the curtain from Clinton. Indeed, it’s not hard to read many scenes as wish fulfillment. As the story progresses, Adams dispenses entirely with subtlety and discretion to dish out some no-holds-barred diplomacy. Adams also has a schoolteacher-turned-counselor named Betsy Jameson, a character based on Clinton’s real-life best friend, Betsy Ebeling. Betsy does some sleuthing, and her scenes will, perhaps, feel more familiar to Penny’s fans than the rest of the book. This cozy mystery element is just as fanciful as the rest, but there’s something satisfying about watching two middle-aged women save the world.

More of a novelty for political nerds than a compelling thriller.