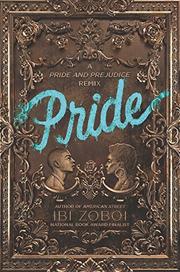 Seventeen-year-old Zuri Benitez deals with gentrification in her Brooklyn neighborhood and her own bias in this Pride and Prejudice remix.

Zuri, or ZZ from the Block, loves her big, loud Haitian-Dominican family. She loves her Bushwick neighborhood. She doesn’t love the gentrification changing her hood, “like my face and body when I was in middle school—familiar but changing right before my eyes.” So when the rich Darcy family moves into the expensive renovated house across the street, she’s skeptical even though they’re also black. The Darcy brothers are handsome, but Zuri thinks Darius Darcy’s a snob. She opts instead for Warren, the brothers’ classmate and a boy who feels familiar. Austen fans will guess his true colors. When poet Zuri unexpectedly runs into Darius at an open mic, she begins to rethink her assessment of him, and the two, as expected, fall for each other. While Darius’ attraction to Zuri makes sense, Zuri’s doesn’t seem to move beyond his physical attractiveness—odd for a character who’s otherwise thoughtful and complex. The ending, both realistic and bittersweet, is a culmination of the book’s examination of the costs of gentrification. The plot moves too fast for substantial character growth on Zuri’s part, and some elements feel contrived, but these flaws don’t spoil a book which is not only a retelling, but an examination of timely issues, including class, blackness, and intraracial prejudice.