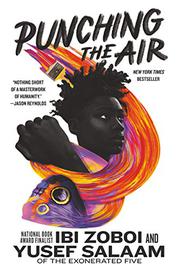 Ava DuVernay’s critically acclaimed When They See Us tells the story of Salaam’s wrongful conviction as a boy, a story that found its way back into the national conversation when, after nearly 7 years in prison, DNA evidence cleared his name. Although it highlights many of the same unjust systemic problems Salaam faced, this story is not a biographical rendering of his experiences. Rather, Zoboi offers readers her brilliance and precision within this novel in verse that centers on the fictional account of 16-year-old Amal Shahid. He’s an art student and poet whose life dramatically shifts after he is accused of assaulting a White boy one intense night, drawing out serious questions around the treatment of Black youth and the harsh limitations of America’s investment in punitive forms of justice. The writing allows many readers to see their internal voices affirmed as it uplifts street slang, Muslim faith, and hip-hop cadences, showcasing poetry’s power in language rarely seen in YA literature. The physical forms of the first-person poems add depth to the text, providing a necessary calling-in to issues central to the national discourse in reimagining our relationship to police and prisons. Readers will ask: Where do we go from here?