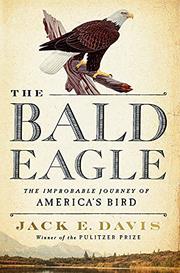 The Improbable Journey of America's Bird

A majestic history of the bald eagle and how it has reflected the nation’s changing relationship to nature.

Davis, whose 2017 book The Gulf won the Kirkus Prize and the Pulitzer Prize, creates an equally sweeping cultural and natural history centered on the majestic bald eagle, a bird endemic only to North America. Regarded as the king of the avian species, symbolizing “fidelity, self-reliance, strength, and courage,” in 1782, the bald eagle was chosen to be emblazoned on the Great Seal of the United States. Debate over the image was, unsurprisingly, vigorous; Benjamin Franklin, it was rumored, proposed a turkey. The eagle prevailed, however, representing “the picture of the nation’s full-fledged independence and sovereignty.” As much as the image inspired patriotic pride, some people—farmers who accused them of preying on livestock and even John James Audubon, who called the bird “ferocious” and “overbearing”—derided them. Farmers killed them, and so did early naturalists. Lacking cameras and binoculars, felling eagles was the only way to investigate them closely. Eagles, Davis writes, were “sentenced to death by the ornithology of the day.” By the late 19th century, however, attitudes about humans’ responsibility to nature began to change. Although in “a land of plenty” there seemed no need for conservation movements, the threat of bald eagles’ extinction ignited efforts to save the species. By 1900, 22 states had Audubon societies, and some states outlawed the hunting of eagles. Examination of their migration patterns, courtship, breeding, and communication revealed that eagles displayed “fidelity to both spouse and home,” were caring parents, and had no interest in carrying off human babies—once a widespread fear. In the 1950s, however, the potent pesticide DDT emerged as a devastating threat, causing nest failures: eggs not being laid and laid ones failing to hatch. The author’s consistently lively, captivating narrative celebrates the naturalists, scientists, activists, artists (Andy Warhol, among them), politicians, and breeders who have championed the extraordinary “charismatic raptor.”

A rousing tale of a species’ survival.