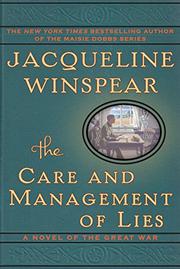 THE CARE AND MANAGEMENT OF LIES

Five kind and honorable people are caught up in the depredations of the Great War in this first stand-alone novel by the author of the Maisie Dobbs mystery series (Leaving Everything Most Loved, 2013, etc.)

In 1914, as war looms, newlyweds Tom and Kezia Brissenden are making a go of the farm Tom inherited from his father, a farm that would have been part of the estate of wealthy gentleman Edmund Hawkes had not his great-grandfather lost it to Tom’s great-grandfather in a darts game. Kezia, a vicar’s daughter, is earnestly striving to supplant her finishing school ways with those of a farm wife, consulting a housewifery guide, The Woman’s Book. Although Hawkes is attracted to Kezia, he keeps a respectful distance, just as he is cordial but not friendly toward Tom. This distance persists as Tom and Hawkes both enlist and are sent to the front line in France, where Tom, a private, serves under Capt. Hawkes. Kezia keeps Tom’s spirits up with her letters describing the sumptuous meals she prepares for him in her imagination, where wartime food shortages and government inroads on the farm’s production aren't problems. The whole battalion soon looks forward to her letters and the occasional fruitcake. However, Tom is scapegoated by this novel’s closest thing to a villain, the cynical and embittered Sgt. Knowles, who resents the influx of so many green recruits. Meanwhile, Tom’s sister (and Kezia’s best friend), Thea, anguishes over whether she will be arrested for her activities as a suffragette and pacifist. Ultimately, she decides that the only way to escape government oppression is to reaffirm her loyalty: She becomes an ambulance driver at the front, where Kezia’s father, Rev. Marchant, is ministering to troops in the trenches. Without questioning either the cause of the war or the dubious tactics employed, seemingly, to ensure maximum loss of life for minimal military advantage, these characters simply get on with it, reaffirming our faith in the possibility of everyday nobility.