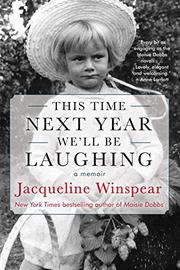 THIS TIME NEXT YEAR WE'LL BE LAUGHING

The bestselling author recalls her childhood and her family’s wartime experiences.

Readers of Winspear’s popular Maisie Dobbs mystery series appreciate the London investigator’s canny resourcefulness and underlying humanity as she solves her many cases. Yet Dobbs had to overcome plenty of hardships in her ascent from her working-class roots. Part of the appeal of Winspear’s Dobbs series are the descriptions of London and the English countryside, featuring vividly drawn particulars that feel like they were written with firsthand knowledge of that era. In her first book of nonfiction, the author sheds light on the inspiration for Dobbs and her stories as she reflects on her upbringing during the 1950s and ’60s. She focuses much attention on her parents’ lives and their struggles supporting a family, as they chose to live far removed from their London pasts. “My parents left the bombsites and memories of wartime London for an openness they found in the country and on the land,” writes Winspear. As she recounts, each of her parents often had to work multiple jobs, which inspired the author’s own initiative, a trait she would apply to the Dobbs character. Her parents recalled grueling wartime experiences as well as stories of the severe battlefield injuries that left her grandfather shell-shocked. “My mother’s history,” she writes, “became my history—probably because I was young when she began telling me….Looking back, her stories—of war, of abuse at the hands of the people to whom she and her sisters had been billeted when evacuated from London, of seeing the dead following a bombing—were probably too graphic for a child. But I liked listening to them.” Winspear also draws distinctive portraits of postwar England, altogether different from the U.S., where she has since settled, and her unsettling struggles within the rigid British class system.

An engaging childhood memoir and a deeply affectionate tribute to the author’s parents.