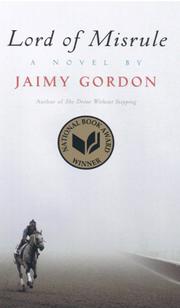 A novel of luck, pluck, farce and above all horse racing—not at tony and elegant sites like Churchill Downs and Ascot but rather at a rinky-dink racetrack in Indian Mound Downs, W.Va.

Gordon (Bogeywoman, 1999, etc.) clearly loves the subculture of grifters and ne’er-do-wells whose lives center on a venue that obviously has never and will never bring them success. Her lowlifes have names like Two-Tie, Medicine Ed, Kidstuff and Deucey, and they’re capable of speaking a kind of racetrack patois occasionally reminiscent of Damon Runyon characters: “So I want you should write me a race, well, not me personally, fellow from Nebraska, kid I used to know back when—actually I used to know his mother…She was very good to me. Alas, I fear I did not return the favor like I should have.” At the center of the novel is Tommy Hansel, a horse trainer with a get-rich-quick scheme that he feels cannot fail. He plans to enter “sure-fire” winners in claiming races, benefit from the long odds, then get out of town quickly. Nothing, of course, goes according to plan, especially since everyone seems on to his scheme, and the horses aren’t as cooperative as Tommy would like them to be. Complicating the issue is the quirky, intelligent Maggie Koderer, new to the horse-race business but nonetheless Tommy’s love. Maggie is college-educated but is drawn to the seamy underbelly of the track and the broken-down beauty of the horses. Gordon structures the narrative around the four horses, the last best hope being Lord of Misrule, and she seamlessly moves the reader from one narrative consciousness to another without being manipulative or intrusive. The writing about the races themselves is a tour de force of energy and esprit. By the end of the novel none of the characters quite have what they want, but most of them get what they deserve.

Exceptional writing and idiosyncratic characters make this an engaging read.