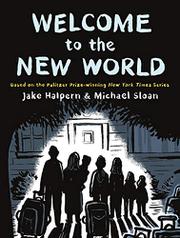 WELCOME TO THE NEW WORLD

Immersion journalism in the form of a graphic narrative following a Syrian family on their immigration to America.

Originally published as a 22-part series in the New York Times that garnered a Pulitzer for editorial cartooning, the story of the Aldabaan family—first in exile in Jordan and then in New Haven, Connecticut—holds together well as a full-length book. Halpern and Sloan, who spent more than three years with the Aldabaans, movingly explore the family’s significant obstacles, paying special attention to teenage son Naji, whose desire for the ideal of the American dream was the strongest. While not minimizing the harshness of the repression that led them to journey to the U.S.—or the challenges they encountered after they arrived—the focus on the day-by-day adjustment of a typical teenager makes the narrative refreshingly tangible and free of political polemic. Still, the family arrived at New York’s JFK airport during extraordinarily political times: Nov. 8, 2016, the day that Donald Trump was elected. The plan had been for the entire extended family to move, but some had traveled while others awaited approval, a process that was hampered by Trump’s travel ban. The Aldabaans encountered the daunting odds that many immigrants face: find shelter and employment, become self-sustaining quickly, learn English, and adjust to a new culture and climate (Naji learned to shovel snow, which he had never seen). They also received anonymous death threats, and Naji wanted to buy a gun for protection. He asked himself, “Was this the great future you were talking about back in Jordan?” Yet with the assistance of selfless volunteers and a community of fellow immigrants, the Aldabaans persevered. The epilogue provides explanatory context and where-are-they-now accounts, and Sloan’s streamlined, uncluttered illustrations nicely complement the text, consistently emphasizing the humanity of each person.

An accessible, informative journey through complex issues during turbulent times.