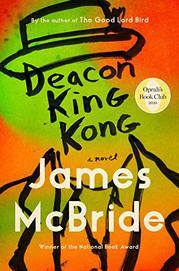 It's September 1969, just after Apollo 11 and Woodstock. In a season of such events, it’s just as improbable that in front of 16 witnesses occupying the crowded plaza of a Brooklyn housing project one afternoon, a hobbling, dyspeptic, and boozy old church deacon named Cuffy Jasper "Sportcoat" Lambkin should pull out a .45-caliber Luger pistol and shoot off an ear belonging to the neighborhood’s most dangerous drug dealer. The 19-year-old victim’s name is Deems Clemens, and Sportcoat had coached him to be “the best baseball player the projects had ever seen” before he became “a poison-selling murderous meathead.” Everybody in the project presumes that Sportcoat is now destined to violently join his late wife, Hettie, in the great beyond. But all kinds of seemingly disconnected people keep getting in destiny's way, whether it’s Sportcoat’s friend Pork Sausage or Potts, a world-weary but scrupulous White policeman who’s hoping to find Sportcoat fast enough to protect him from not only Deems’ vengeance, but the malevolent designs of neighborhood kingpin Butch Moon. All their destines are somehow intertwined with those of Thomas “The Elephant” Elefante, a powerful but lonely Mafia don who’s got one eye trained on the chaos set off by the shooting and another on a mysterious quest set in motion by a stranger from his crime-boss father’s past. There are also an assortment of salsa musicians, a gentle Nation of Islam convert named Soup, and even a tribe of voracious red ants that somehow immigrated to the neighborhood from Colombia and hung around for generations, all of which seems like too much stuff for any one book to handle. But as he's already shown in The Good Lord Bird (2013), McBride has a flair for fashioning comedy whose buoyant outrageousness barely conceals both a steely command of big and small narrative elements and a river-deep supply of humane intelligence.

An exuberant comic opera set to the music of life.