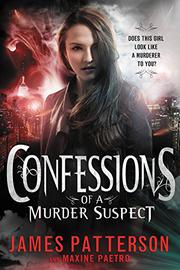 CONFESSIONS OF A MURDER SUSPECT

When a wealthy and powerful New York couple is discovered dead in their bed, the prime suspects are their four overachieving children.

Fifteen-year-old Tandy Angel, likely the last person to see her parents alive, is determined to use her analytical mind to find the perpetrators, even if she herself is the criminal. Tandy begins to investigate the possible leads. Could it be her hot-tempered older brother, her artistic twin or her overly aggressive younger brother? Police investigators seem to think that it is Tandy who is emerging as the most likely suspect. Unfortunately the more she digs, the more confusing everything becomes. Fans of Patterson’s fast-paced style and surprising plot twists will embrace the beginning of another series. They may, however, be disappointed at the lack of suspense and true mystery that are hallmarks of his work for adults. Tandy, addressing readers directly, questions her own judgment, but she never manages to be the unreliable narrator that she insists she is. The ultimate reveal will likely leave readers feeling as though they were led on a wild goose chase through the disturbing world of a very twisted family.

An unsatisfying ending and an unlikable cast make this thriller anything but.