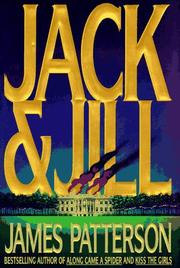 Can D.C. deputy chief Alex Cross (Hide & Seek, 1995, etc.) stop a demented duo thinning the ranks of the Washington elite en route to assassinating the President? You just might be surprised at the answer. A serial killer (who seems to have sat through the film Network one time too many) is at work. The killer, a self-anointed patriot code-named "Jack" has, together with his partner "Jill," organized a bloody vendetta that gives the phrase "bleeding-heart liberals" a more visceral meaning. The Secret Service, worried that the doggerel notes signed "Jack and Jill" left at each killing might refer to their own code names for President Thomas Byrnes and his First Lady, bring nonpareil cop Cross into the case to help protect the First Family. And you don't need Cross's experience to see that Jack and Jill are working their way up the liberal ladder to the Byrneses when a caller to the President identifies herself as Jill, that Jill, and asks if he's ready to die. But it may not be such a great idea to pull Cross off his present case, a series of child murders, since the killer, convinced that the cops don't care anything about a few dead black kids, begins to see himself in competition with Jack and Jill, and steps up his own campaign accordingly. Meanwhile, it's Cross, whose idea of sharp investigative work consists of flushing suspects into futile, cinematic chases, versus Jack and Jill, whose improbable identities will be swiftly, abundantly clear to most readers as they continue to mn rings around the hapless FBI, the CIA, and the Secret Service, even from beyond the grave. Makes you wonder. The real surprise here, though, is the cavalier lack of closure to this paranoid fantasy, as if an Oliver Stone film ended without fingering the conspirators. Even Patterson's most ardent admirers should beware of this dog.