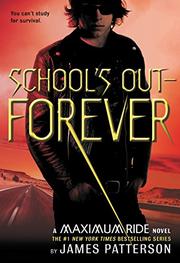 Readers are in for another exciting wild ride of fights (bloody) and flights (in the sky) as Max and her flock struggle to stay alive. 98% human with 2% avian genes grafted on, these six winged, scrappy kids soar powerfully through the air. In this second installment, they head towards Washington D.C. in pursuit of their unknown parents of origin, who may or may not know that the kids were raised by genetic scientists prone to torture. Max’s straightforward, sardonic first-person voice does most of the narration as the flock navigates a rescue by a vaguely maternal FBI honcho, a stint in a regular school (or is it?) and constant pursuit by Erasers (deadly wolf-human combinations). Who controls the Voice in Max’s head telling her to save the world? What would that even mean? Is an international corporation the enemy? Who’s in league with the evil scientists who created the flock? These questions are yet unanswered, leaving readers breathless for the follow-up to this action-packed page-turner. (Science fiction. YA)