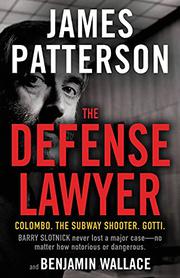 The Patterson publishing machine clanks its way into the nonfiction aisles in this lumbering courtroom drama.

Barry Slotnick made a considerable fortune and reputation as a defense attorney who had a long list of controversial clients, including mob boss John Gotti and Panamanian strongman Manuel Noriega. An “urbane lawyer known for his twenty-five-hundred-dollar Fioravanti suits, he was not unacquainted with violence,” write Patterson and Wallace. One of his early cases, indeed, involved a group of Jewish Defense League members who allegedly blew up a Broadway producer’s office, killing a woman who worked there. Slotnick’s defense was a standard confuse-the-jury ploy, but it worked. He put similar tactics to work in his defense of Bernhard Goetz, the “subway shooter” whose trial made international news. The authors open after that trial had concluded in yet another Slotnick win, and with a sensational incident: He was attacked by a masked man who beat him with a baseball bat. The evidence is sketchy, but it seems to place the attack in the hands of organized crime—perhaps even Gotti himself. No matter: Slotnick, “who saw himself as the foe of the all-powerful government” and “liberty’s last champion,” was soon back to representing clients including Radovan Karadžić, the murderous Bosnian Serb who was eventually imprisoned for having committed genocide; Dewi Sukarno, the widow of Indonesia’s similarly bloodstained president, “arrested for slashing the face of a fellow socialite with a broken champagne glass at a party in Aspen”; and Melania Trump, who had chosen Slotnick “to handle her prenup.” In the hands of a John Grisham, the story might have come to life, but while Patterson does a serviceable if cliché-ridden job of recounting Slotnick’s career, he fails to give readers much reason to admire the man.

For Patterson fans who can’t get enough.