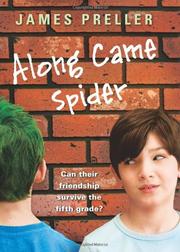 Spider Stevens and Trey Cooper have lived next door to each other their entire lives and have been best friends throughout their years at Spiro Agnew Elementary School. Trey has a type of autism that seems to accentuate the worst traits of ADHD and OCD. He has poor self-control, peculiar habits and awkward social skills. In fifth grade, Trey’s obvious eccentricities, once acceptable and even endearing, are now a liability, and Trey’s peers now regard him as weird and an outcast. This puts Spider in the difficult position of having to choose whether to remain loyal to his oldest friend or to abandon him to join the ranks of the popular kids. Preller adeptly portrays the psychological and social dynamics of this age group, and Trey is realistic and sympathetic as a misfit, if not as memorable as Jack Gantos’s Joey Pigza or Jerry Spinelli’s David Zinkoff. The pressures Spider feels from his peers to belong and conform will resonate with middle-grade readers. (Fiction. 8-11)