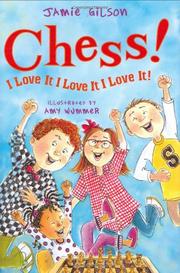 by Jamie Gilson and illustrated by Amy Wummer

Sumac School second-grader Richard and pesky rival Patrick from Gotcha! (2006) return with the rest of Mrs. Zookey’s class. Patrick seems to have learned little; he still glories in causing problems and puffing himself up by telling lies. Many of the students have joined Mr. Economopoulos’s after-school chess club (the kids call the prestidigitating assistant principal “Mr. E”). As they prepare for their first tournament against the other elementary schools in the area, Richard struggles with a lack of confidence and a fear that he’s too much like irritating Patrick in his lack of concentration. The team, including Patrick, pull together and perform well with the promise of future victories. The fifth volume in Gilson’s Kids at Table Two series offers more of the same: light fare for the transition out of easy readers. Though the emotions are genuine, the characters are stiff. Mostly for fans of the series and as a read-aloud to classes learning to play chess. (Fiction. 7-9)