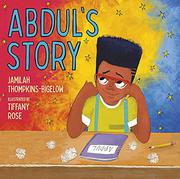 A young Black boy struggles with writing—until a special guest visits his class.

Abdul loves to tell stories about the people in his neighborhood, and his friends at school love hearing them. But whenever he tries to write down his stories in a notebook, spelling rules confuse him, and his “scribbly, scratchy, scrawly letters” never stay on the lines. Abdul decides that his stories are not for books. One day, a visitor comes to Abdul’s class; Mr. Muhammad—a Black man with a flattop haircut like Abdul’s and whose sneakers, like Abdul’s, have “not a single crease or scuff”—is a writer who urges the students to “write new stories with new superheroes.” Abdul feels motivated to give writing another shot, but again he ends up with endless erasure marks and smudges. Mr. Muhammad shows Abdul his own messy notebook, and Abdul, who is left-handed, decides to try writing without erasing. He makes a mess but searches through the clutter for sentences he loves. He rewrites and rewrites and works on his mistakes until he forms a story he likes, proudly claiming the title of writer. Bright, full-color, textured digital illustrations depict a racially diverse, joyful community. This story offers an honest portrayal of learning differences and demonstrates the importance of role models who reflect kids’ own backgrounds. It is a lovely addition to the shelf of meaningful children’s books portraying Black Muslim Americans in everyday situations. (This book was reviewed digitally.)

A real treasure of a book for any child who has struggled to learn a skill.