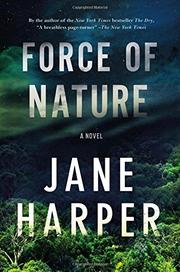 A woman goes missing in the Australian wilderness in Harper’s (The Dry, 2017) second thriller to feature Agent Aaron Falk of the Federal Police.

Falk is still recovering from his last case, and the fire that burned his hand badly, when he gets a call from his new partner, Carmen Cooper, that a woman named Alice Russell has gone missing in the Giralang Ranges three hours outside Melbourne, where she had been taking part in a corporate retreat with her colleagues from the BaileyTennants accountancy firm. This sparks a grim memory for Falk: more than 20 years ago, when the policeman was a teenager, a killer named Martin Kovac littered the same area with the bodies of young women he’d murdered. Kovac couldn't have taken Alice, because he’s dead, but her disappearance dredges up some horrific memories in the collective consciousness, which adds a creepy dimension to an increasingly puzzling case. Falk and Cooper don’t work missing persons—they’re financial investigators, and Alice was helping them with a case on the down low, gathering information on her boss’s money matters. Falk can’t help worrying that her disappearance might have something do to with the investigation, especially when he realizes he has a garbled message from Alice on his phone. After Falk and Cooper join the search, they discover that Alice’s problems with her co-workers went beyond the professional and that tensions ran as deep and wide as the wilderness she's lost in. Harper’s crackerjack plotting propels the story, splitting the narrative between Alice and her BaileyTennants co-workers navigating the team-building exercise—and their own secrets—in the days leading up to her disappearance and Falk and Cooper’s look into the untoward financial doings of the company’s CEO, Daniel Bailey. Harper layers her story with hidden depths, expertly mining the distrust between Alice and her four colleagues, and the secrets that simmer under the surface.

Lacks some of the scorching momentum of Harper's first book but is nonetheless a spooky, compelling read.