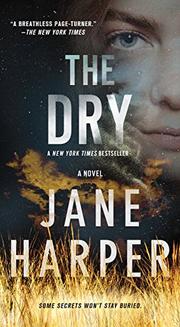 A mystery that starts with a sad homecoming quickly turns into a nail-biting thriller about family, friends, and forensic accounting.

Federal agent Aaron Falk is called back to his rural Australian hometown for the funeral of his best friend, Luke, who apparently committed suicide after killing his wife and 6-year-old son; he’s also called to reckon with his own past. Falk and his father were run out of town when he was accused of killing his girlfriend. Luke gave him an alibi, but more than one person in town knows he was lying. When Luke’s parents ask Falk to find the truth, long-buried secrets begin to surface. Debut author Harper plots this novel with laser precision, keeping suspects in play while dropping in flashbacks that offer readers a full understanding of what really happened. The setting adds layers of meaning. Kiewarra is suffering an epic drought, and Luke’s suicide could easily be explained by the failure of his farm. The risk of wildfire, especially in a broken community rife with poverty and alcoholism, keeps nerves strung taut. Falk's focus as an investigator is on following the money; nobody in town really understands his job, but his phone number turns up on a scrap of paper belonging to Luke’s late wife, a woman he’d never met. The question throughout is whether Luke’s death is something a CSI of spreadsheets can unravel or if it’s a matter of bad blood from times past finally having reached the boiling point. Falk struggles to separate the two and let his own old grudges go. A fellow investigator chastises him: “You’re staring so hard at the past that it’s blinding you.”

A chilling story set under a blistering sun, this fine debut will keep readers on edge and awake long past bedtime.