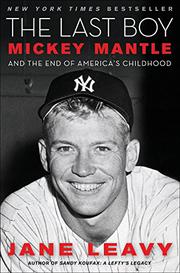 Mickey Mantle and the End of America's Childhood

Another biography of the late Yankee slugger—but this candid, compassionate portrait is worth a dugout full of the others.

Sports journalist Leavy (Sandy Koufax, 2002) produces an enduring, though certainly not endearing, portrait of The Mick. Eschewing traditional chronology, the author begins with a 1983 interview she conducted with the boozy, boorish, lecherous Mantle (he’d been retired for 15 years), an experience she spreads throughout the narrative, using portions of it to introduce each major section. She focuses on 20 significant days in Mantle’s life (five of them after his playing days), beginning with his career-threatening injury in 1951 in Yankee Stadium, and ending with his death to cancer in 1995. In between are glimpses of Mantle as son, brother, husband, adulterer (he was a serial offender), father (not a good one), player, teammate and fading and feckless celebrity. Leavy is generally careful not to celebrate his athletic accomplishments excessively, though it’s hard not to. His home runs were prodigious; his speed was gazelline; his capacity to endure pain was humbling. He won the Triple Crown in 1956 and entered the Hall of Fame as soon as he was eligible. The Mick, however, harbored many demons, and the author justly emphasizes them when appropriate. Often ignorant, capricious and extremely self-centered, he drank heavily, cheated on his wife and could be crude and obnoxious to fans (some of the things he wrote on souvenirs for young hero-worshippers—e.g., “You’re lucky. Your mom has nice tits”—are legendary). But as Leavy points out, it was in no one’s pecuniary interest to portray Mantle as anything other than the All-American Ballplayer.

The best of the Mantle biographies.