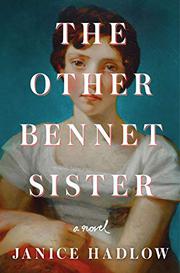 THE OTHER BENNET SISTER

Another reboot of Jane Austen?!? Hadlow pulls it off in a smart, heartfelt novel devoted to bookish Mary, middle of the five sisters in Pride and Prejudice.

Part 1 recaps Pride and Prejudice through Mary’s eyes, climaxing with the humiliating moment when she sings poorly at a party and older sister Elizabeth goads their father to cut her off in front of everyone. The sisters’ friend Charlotte, who marries the unctuous Mr. Collins after Elizabeth rejects him, emerges as a pivotal character; her conversations with Mary are even tougher-minded here than those with Elizabeth depicted by Austen. In Part 2, two years later, Mary observes on a visit that Charlotte is deferential but remote with her husband; she forms an intellectual friendship with the neglected and surprisingly nice Mr. Collins that leads to Charlotte’s asking Mary to leave. In Part 3, Mary finds refuge in London with her kindly aunt and uncle, Mr. and Mrs. Gardiner. Mrs. Gardiner is the second motherly woman, after Longbourn housekeeper Mrs. Hill, to try to undo the psychic damage wrought by Mary’s actual mother, shallow, status-obsessed Mrs. Bennet, by building up her confidence and buying her some nice clothes (funded by guilt-ridden Lizzy). Sure enough, two suitors appear: Tom Hayward, a poetry-loving lawyer who relishes Mary’s intellect but urges her to also express her feelings; and William Ryder, charming but feckless inheritor of a large fortune, whom naturally Mrs. Bennet loudly favors. It takes some maneuvering to orchestrate the estrangement of Mary and Tom, so clearly right for each other, but debut novelist Hadlow manages it with aplomb in a bravura passage describing a walking tour of the Lake District rife with seething complications furthered by odious Caroline Bingley. Her comeuppance at Mary’s hands marks the welcome final step in our heroine’s transformation from a self-doubting wallflower to a vibrant, self-assured woman who deserves her happy ending. Hadlow traces that progression with sensitivity, emotional clarity, and a quiet edge of social criticism Austen would have relished.