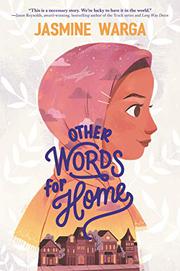 OTHER WORDS FOR HOME

A story about war and displacement, resilience and adjustment.

Warga portrays with extraordinary talent the transformation of a family’s life before and after the war began in Syria. Living in a tourist town on the Syrian coastline, Jude experiences the inequalities in her society firsthand. With the unfolding of the Arab Spring, her older brother, Issa, wants to join protests against the Syrian regime. The parents are in favor of staying out of it, but with news of a new baby and nearby towns turning into battlegrounds, Jude and her mother travel to join her uncle, a medical doctor, and his family in the American Midwest. Her free-verse narration cuts straight to the bone: “Back home, / food was / rice / lamb / fish / hummus / pita bread / olives / feta cheese / za’atar with olive oil. / Here, / that food is / Middle Eastern Food. / Baguettes are French food. / Spaghetti is Italian food. / Pizza is both American and Italian, / depending on which restaurant you go to.” Jude, who has always loved American movies, shares her observations—often with humor—as she soaks everything in and learns this new culture. Only when she starts feeling comfortable with having two homes, one in Syria and one in the U.S., does a terrible incident make her confront the difficult realities of being Muslim and Arab in the U.S.