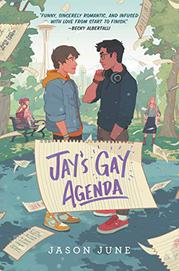 Jay, a gay 17-year-old, experiences a dramatic shift when his mother’s promotion to grocery store district manager transports their family from a small, not-very-diverse town in Eastern Washington to Seattle for his last year in high school. Jay will have to leave his best friend, Lu, but their friendship can survive the distance, right? It also means the chance to cross off items on Jay’s Gay Agenda, a list that ranges from finally meeting another gay boy (after being the only one who is out at his school) to, hopefully, going all the way. Things look up when Jay is taken under the wing of exuberant, genderqueer Max, a new Seattle classmate who helps him make moves toward sexy (and fun) Tony and sexy (and endearing) Albert. The story will amuse readers who are looking for a light read, although the characters at times read more like sitcom versions of teenagers than the real things. While the overall tone is more slapstick and humorous, a subplot concerning orphaned Lu’s financial problems is handled with sensitivity. The coronavirus is mentioned in a context indicating that the story is set in the near post-pandemic future, after quarantines have ended. Most main characters are implied White; Albert is Chinese American, and secondary characters in Seattle reflect the diversity of the city.