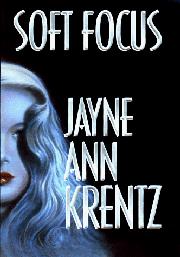 CEOs meet, mate and solve a mystery. Perennial bestseller Krentz (Eye of the Beholder, p. 473, etc.) throws frustrated ex-lovers Elizabeth Cabot and Jack Fairfax together at a ski resort in the Colorado Rockies as they seek to recover —Soft Focus,— a stolen high-tech crystal that will rescue Jack’s Seattle company Excalibur (largely backed by Elizabeth’s Aurora Fund). The dueling execs had an unsatisfying one-night stand under their belts when Elizabeth discovered that Jack was responsible for the hostile takeover of a friend’s business. Jack is unrepentant, though, because the friend tried to cheat his computer-genius brother out of software royalties. His only regret is that Elizabeth never had an orgasm while they were between the sheets; he resolves that if he ever gets another chance, he—ll do it all much, much better. Jack’s opportunity comes when the pair tracks the scientist/thief (also the producer of a movie called Fast Company) to a —neo noir— film festival in the Aspen-like resort of Mirror Springs. As usual with Krentz, the wisecracking lovers are much more fun than the garbled mystery. There’s plenty of romantic fiction’s required sexual tension, as Jack lies his way into the glam vacation house where Elizabeth is staying and the two are thrown together nightly at the illuminated hot tub. On the crystal-seeking front, Krentz tosses in several murders of people trying to do each other out of the valuable invention; a femme fatale who stages her own death, because her husband has a history of killing his wives for the insurance money; and some amusing references to classic noir films. Unfortunately, the villain, such as he is, is identified in a disappointing denouement that ties up loose ends without providing much of a climax. All the flirtatious banter and steamy sex one would expect, but romance writers should leave the whodunit to those who do it better. (Literary Guild/Doubleday Book Club selection; author tour)