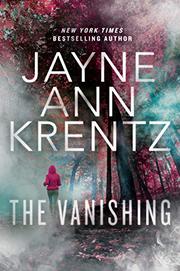 Two women who witnessed a murder in their hometown as teens are suddenly targets of an unknown enemy. As the danger rises, a mysterious investigator with ties to an organization devoted to the paranormal steps in to help.

Catalina Lark and Olivia LeClair were 16 when they were exploring the caves around the tiny Pacific Northwest town of Fogg Lake. Fifteen years before, an incident in the caves had led to a large percentage of the population’s showing paranormal abilities. Fogg Lake residents became extremely wary of strangers, and the town's children were “raised with a degree of caution that bordered on paranoia.” That watchfulness may have saved the girls' lives the night they witnessed a murder in the caves. Years later, Catalina and Olivia have left home to start a private investigation agency in Seattle, and while they don’t advertise their psychic talents, they do use them in their cases. Then Olivia mysteriously disappears. Catalina is just beginning to search for her when Slater Arganbright arrives in the city. Catalina once worked with Slater’s uncle, Victor, the head of an “enterprise dedicated to paranormal research,” but it ended badly, so she’s not thrilled to meet his nephew. However as the two gather information, it begins to look like Olivia’s disappearance is connected to the murder the women witnessed as teens and may be tied to a frightening plot to weaponize paranormal power. Saving Olivia will depend on Catalina's and Slater's talents, and working together makes them realize what great partners they are. Krentz (Untouchable, 2019, etc.) shows her wizardry for worldbuilding and once again incorporates paranormal elements, which will thrill fans.

A smart, creative series start from a romance master who always entertains.